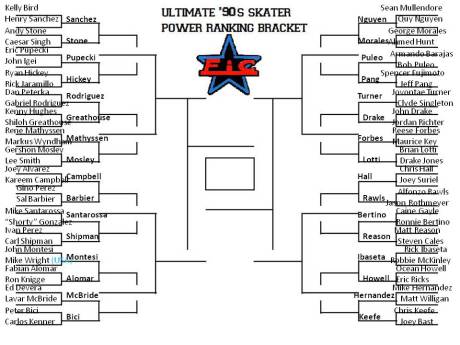 This experiment in interactive content was inspired by a few different elements. First, the growing semi-serious discussion on #skatetwitter about power-ranking stuff in skating–like kickflips, etc. Until now, the closest thing had been the coverage meter on Transworld Business. Secondly, you know on Grantland  how they love to power-rank stuff, and also to place seemingly incongruous things into brackets that you can vote on? Except the latter usually manifests itself in weird matchups like Snapchat vs. Macklemore, or some shit like that. Thirdly, I have been filling out these brackets every March since like 1990; it’s a rite of spring or some shit.  I think I pick too many upsets, though. But you…