I might have actually met Neil in real life, in fact it is much more likely that I have than have not, but neither of us can really remember. Regardless of that he is someone who has completely immersed himself in skateboarding from a very young age and recently he decided to start sharing some of his archived history with the rest of us via the Science vs. Life Tumblr. I recently quizzed the big man to pick his brain on music, skateboarding and its very specific history through the prism of the U.K. skate media.

So what motivated you to dig through your archives and posting them online?

My mum died. My mum died and I had to start clearing out her house. When I was going through everything it became obvious that most of my stuff didn’t really matter, but there were so many memories associated with each skate mag. It’s like I would see one I hadn’t seen for twenty or twenty-five years and it was so immediately familiar. I guess around that time, skating was changing so much, so every month the mags would have something revolutionary in them, so every issue stood out so much. Being a little kid then too, you get way more influenced by what you see in the mags.

I’d always thought British skateboarding, or the British skateboard magazines, were really under-represented in the landscape of teary-eyed internet nostalgia that we have, and the coverage is just so good. It’s not just the obvious names who ended up with acres of page space in the US mags, there were so many rippers that came and went in my first ten years of skateboarding. Mags back then weren’t as obliged to cover their advertisers’ guys, so anybody good would get in, and so much of that has just been lost. A lot of people who skated at that time don’t skate any more, and the ones who do either didn’t keep all the mags or don’t have the inclination to scan and upload them. There have been a few attempts, like TLB’s When We Was Rad site, but that fizzled out, sadly. Lots of the 70s mags have been uploaded, but there’s a big gap between those and something like Chromeball. I kind of felt obliged.

Is there any particular theme behind the specific articles you choose to post, a modus operandi if you will excuse the obvious skateboard related pun?

Not at all, and that’s very much the point. Mags in the late eighties/early 90s were so diverse, just like skateboarding was then. You’d have Christian Hosoi doing an eight-foot method on one page, and some unknown doing a nosepick on a curb on the next. It was so good. Rad, Skateboard! and Skate Action would cover the US pros, but they’d also travel a hundred miles to skate a car park in some shitty new town on a Sunday. And each would get as much coverage. The normal dudes who disappeared had just as much to do with shaping British skateboarding as any Bones Brigade tour ever did.

What period and range of mags do you estimate that you have over there?

I have just about every British mag from the beginning of 1988 up to now, and most American mags. A few had been mutilated to make fingerboards and DIY stickers, but fellow Ayrshireman and all-round ruler Blair Young helped me fill the gaps. I had a paper round when I was a kid, so I was able to steal the mags every month too. If I had to cough up 95p for Rad every month I’d probably not have so many. The name of the blog is from a Buck 65 song (15 Minutes to Live) that was in an old Viewfinder video, and it also has the lyric “I’m not a pack-rat, I’m an archivist”, which I think applies perfectly. I actually just thought of that there. Stoked. I’m the same with skate videos.

Do you have a bunch of specific things picked out to post, or do you wade in every time and flip through till something catches your eye?

Nothing’s in any order, I don’t have the space to have stuff filed properly. It’s all in boxes so I usually dive in and grab a couple of mags at random. I don’t do lots of posts in a row from the same mag; I’ll do one or two so I can go back to it at some point. I’d rather have the blog jumping about all over the place and hopefully surprising people than it being linear, chronological. I’ll post full interviews sparingly, since they can go to about ten pages. I thought about ripping off Chromeball and saving all the related stuff for one post, but that doesn’t really work so well on a rolling blog site like Tumblr. Tumblr’s easier for people to share than something like Blogger, and that’s what I want.

Do you ever keep up with any of the other sites that have done similar work over the years, chromeball, bob shirt, police informer etc?

Of course, but their uploads are all from the US mags. Muckmouth is really good too, shout out to those dudes! I’ve got the paper versions of most of the stuff they scan so it’s nice to see it getting shared, but it’s not really new to me.

You have done some other work within the skateboard world right, music reviews and band interviews right?

I’ve been doing the music stuff for Sidewalk magazine, as well as the odd other thing, for about five years now. Those guys rule.

There must have been some pretty “out there” experiences in all of that?

Speaking to 60s/70s German electronic experimentalist Roedelius the day before his 77th birthday was pretty crazy. He and his mates basically invented electronic music. They were the first guys to make actual music with machines, rather than just recording sounds. He was the nicest guy ever and he was so thrilled that a skateboard mag wanted to speak to him. Interviewing my heroes is pretty out there… Ian MacKaye, Chuck Treece, J Mascis, Steve Albini (although that one was for The Quietus), Karl Bartos of Kraftwerk, Ghostface, Grant Hart of Husker Du and Dale from the Melvins were all super nice. Stuart from Mogwai only gave one-line answers, that was fucking annoying. Maybe, despite pretending to be a skateboarder and dressing like one, he couldn’t be bothered speaking to a skate mag, the twat. If Roedelius can give me an hour and a half, you’d think that guy could stretch to more than a few syllables. GZA was similar, but I think that’s just what he’s like; that’s his ‘thing’. The guy from Ducktails was either fucked or a dick too.

Has anyone reached out to ask you about any of the stuff you have posted of them? I happen to know that Eric Dressen was pretty stoked on the Southbank photo.

Kevin Wilkins, who edits The Skateboard Mag, got in touch to tell me that the Chris Miller interview from Rad was one of his for Homeboy magazine, just before Homeboy folded. The content of what would have been the last mag got sent out to Transworld, but Rad got the Chris Miller interview. He was definitely stoked seeing it again. Ian MacKaye got back in touch after the mag came out to say “A good friend of mine who lives in England contacted me to let me know that his 13 year-old son had been really knocked out by the piece… that’s success!” That stoked me out for months.

Is the Tumblr just a little pet project or do you have ideas of making it something bigger?

I’m happy for it to get as big as it needs to be. It seems like each post is separate anyway, so it’s like lots of individual things, rather than one big thing. Maybe that’s just because it’s me doing it…

The south bank under threat piece in particular highlighted lessons of the past that were possibly forgotten about, just as the church skatepark one highlighted a realm of possibilities for creating a space for skateboarders that was inspirational, how important do you think it is to look back on the past to arm ourselves with the knowledge to go forward in the right direction?

It’s vital! Everything in skateboarding is cyclical. Stuff like Street League isn’t some crazy new threat to our integrity any more than the stadium-tour vert comp circuit was in the 80s. Mags nowadays cover stuff differently; the old mags remind you that there are normal people being rad all over the place. All these scenes populated by people you don’t know if places you’ve never heard of. These still exist! People moan about energy drink ads in magazines, but the old mags were riddled with stuff like that; ads for Tango, Coke, Sony, Rollerblades, scooters… All sorts. I think everything’s a bit too formulaic now. Designated skate spaces being a bit of a problem. Back when skateboarding was changing, at the start of the 90s, people were skating anything. The importance of getting X trick at Y spot is too exaggerated nowadays. You don’t need to be somebody like Todd Falcon to do stuff differently, just don’t let there be rules!

In the early/mid 90s, when skateboarding was completely dead, people had to do stuff themselves. They had to build things, travel long distances, struggle to buy boards and shoes, get laughed at. Skateboarding is cool now, it’s easy to be a skateboarder, but that might change again. Like Lance on his pogo stick in Goldfish, you need to remember why you started skateboarding. Unless you started to be cool. Forget that. Old mags were way more about the act of skateboarding, and the feeling you get from it, rather than the culture and personalities of skateboarding. That side of it should be optional, the ‘industry’ side. Riding a skateboard doesn’t change. 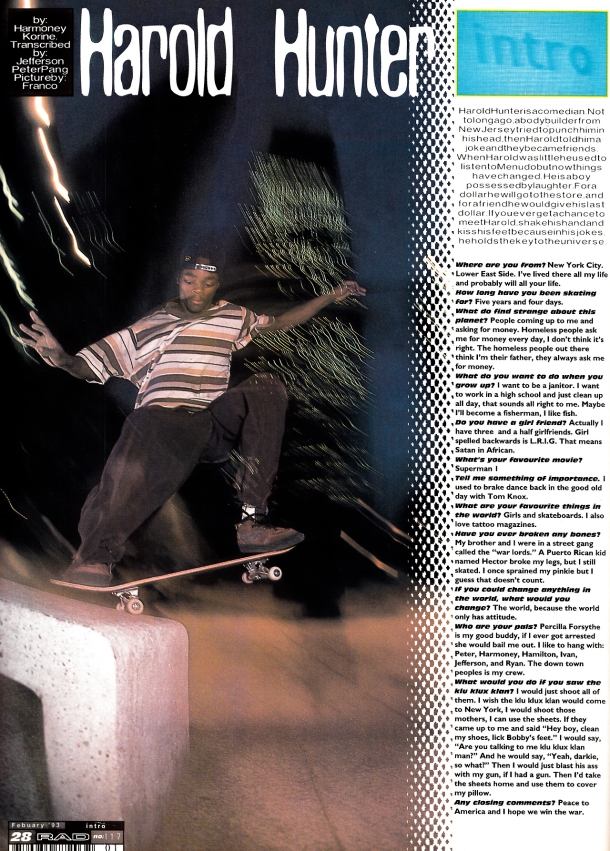 Any upcoming posts that you are particularly excited about that you want to share?

I’m building up a folder of product-page scans. For a while, every month would have a (soon-to-be) ‘classic’ board released. People didn’t just want logo boards back then. Graphics went from lasting years to lasting a month. I dread to think how many graphics some people must have had. C&D only scratch the surface, and stuff like Skately or Art of Skateboarding only have a selection. The product pages back then were always one of my favorite bits; you could see skateboarding changing month by month by just looking at the graphics.

Thanks for doing what you do, and Know that I speak for a great many others when I say keep it up!

I’m not doing much. The guys that crammed themselves and their cameras into a mini to drive a hundred miles to a comp in a Sainsbury’s car park back when only a handful of people gave a hoot did the hard work. Tim Leighton-Boyce and Steve Kane, with their unerring visions, shaped British skateboarding. Safe to say British skateboarding had a massive effect on global skateboarding too. Alongside TLB and Skane, people like Wig Worland, Sam Ashley, Andy Horsley, Ben Powell, Percy Dean, Oliver Barton, Jay Podesta, Paul Duffy, Meany, Kingy and Vernon Adams all changed our world in one way or another. Endless thanks to them for holding it down, and big thanks to Kevin at Volcom. You guys all rule.