After many setbacks, hiatuses and distractions the first full length offering from Glasgow based film-maker Paul McConnach is finaly here. Produced under the banner Iron Giraffe, the film is called Overcast and features a broad cross section of Scottish over the past few years. Stu Graham, Jamie Bolland, Collin Kennedy, Paul Silvester they are all in there as are the next generation of guys coming up through the ranks.

In issue VI Paul was a contributor to our “behind the screens” article in which we looked at a selection of interesting of funny screen grabs from various video projects that had been noticed during the editing process and got the respective filmers to give us the stories behind these single frame windows into the filming process. Now as you can imagine with a project as long and storied as Overcast ended up being there were a lot of stories to be told, and there was no way we were ever going to be able to include all of them in the magazine and so to celebrate the release of the video we are proud to present and extended look behind the scenes of The Iron Giraffe.

“The famous Gardner street has claimed many a layer of skin however this morning it was Andy’s cap that was sacrificed. We spent a good twenty minutes trying to find it but it had vanished into thin air…or been nicked, it gets shady in Partick”. 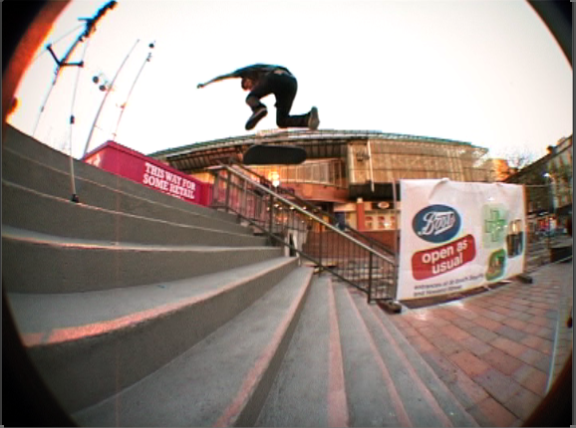 “It was a late Friday afternoon and Matthew had mentioned something about a temporary set of stairs that had been built while the St Enoch centre was being worked on. Not the best place to go on a Friday night but we made our way down anyway. He went straight in trying to switch backside flip them. Eventually Matthew started to give up and said he had to be somewhere in ten minutes..I phoned up Alex on the sly and he drove down to shoot the photo…half an hour later he had it. I don’t think he made his dinner date but he made the contents page of Sidewalk, stoked!”

Charlie and I had been trying to find something to film in Edinburgh but we were getting kicked out of everywhere this day. We had plans to head up to a rail a twenty minute skate away but on our way he mentioned something about a line he was thinking about just off George Street. We decided we would have a few goes at it and see how it went. This turned into about a two hour session..the rail at the end of the line was across the road from a restaurant with a big glass front window so we were providing some entertainment for the people inside. Eventually an old american couple stopped Charlie as he was about to go and said they very much enjoyed watching and slapped forty dollars in his hand…a quick jump to the offy, eight beers and a hour later we got the line. Next morning he exchanged the money and got about 26 quid out of it, not bad for a nights work.

“The Week of Bad Luck” – Physical, financial, and mental breakdown.

“I had to include this photo. A big reason this video took so long to make was there was about a year hiatus from when my camera and laptop had been stolen. I had been living with Rory in the city centre at the time in a bit of a party flat. We got back from the pub one night and passed out. Woke up the next morning and realised the locks on the doors had been burst and our laptops were gone, seems we got broken into while we were out and didn’t even realise the night before. If that wasn’t bad enough a few days later I had a job on filming a band at T in the Park, half the band put their equipment on the runner bus, I put my camera on the same one…That was to be the last time I’d see that VX and the last time the guys would see those guitars. When I phoned the police about trying to track it down they just laughed, dicks”.

“Focus were having a premier at the shop next to Saughton this day, afterwards everyone went round to the skatepark. The beers were flowing and Raberdeen was in town. A perfect mixture of beer and herb combined brought him to claim this drop in a short drive down the road. We headed there and he got up the top to have a look. The police showed up almost instantly and tried to block the landing. We convinced them to let him have one go, he tried and almost landed on his head getting caught on the edge of the drop. A short while after this he went back and gave it another go, that time he wasn’t so lucky and split his head open. There was a photo of it in Kingpin Magazine and last year we found out the CCTV footage of it has been making the rounds in schools as part of a police presentation of some kind. Wish I had a copy of it”. 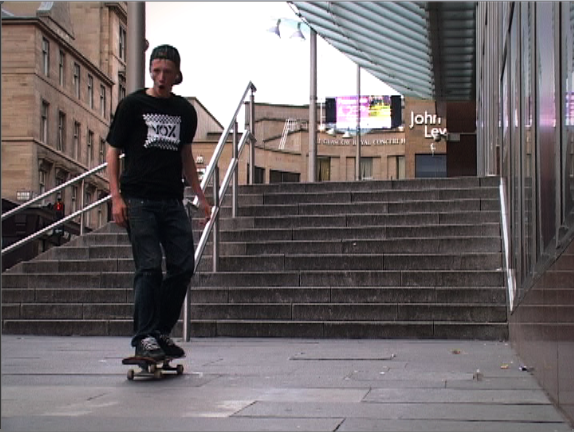 “How How!” – Matt Fenton rounds things out with a mystery banger.

“I think Matts face says it all. It was a heated session and out of no where he pulled out by far the best trick i’ve ever filmed. I’m pretty sure by his expression he didn’t expect it to happen as much as we did. You’ll need to watch the video to find out what it is though!”

“This video has been in the works for a while now. Not so much out of choice but circumstance. Saying that, I think its all worked out for the best. The name Iron Giraffe comes from the way the cranes appear hanging over the Clyde river running through the centre of Glasgow City. Hopefully this promotional video, Overcast, represents the skating Scotland’s so renowned for. Harsh and rugged spots set to the backdrop of the long cold winters and short summers”.

I hope you enjoy!

And the wait is indeed over, you can watch Overcast right now here: WATCH OVERCAST

Then go pick up a copy on DVD along with some crisp Iron Giraffe merchandise here: IRON GIRAFFE WEB STORE

6 thoughts on “Behind the scenes of “Overcast” by Iron Giraffe”