Joe Gavin has been a stalwart of the Manchester scene for as far back as I can remember. He has always had a pedigree to his skateboarding that has elevated him to the forefront of the U.K. scene in terms of talent, and it comes along with a humbleness that has brought him the respect of his peers and fans alike. An underground hero, the northern ninja with the Shaolin style, Joe has talents that extend far beyond skateboarding, he is starting to make waves as a film maker and videographer. With skateboard videos, documentary films, and music videos spanning Indie Rock to Drum & Bass his canvas is broad and people are starting to take notice; he was recently interviewed under the headline “Hot Right Now” by the Manchester Evening News. You might imagine that with all of his other interests and talents, and with the numbers of years that he has under his belt and the toll that it can take, that Joe might be stepping back from the life of a professional skater, taking a back seat to focus on these other pursuits. In fact the opposite is true with magazine covers and full parts all over the place in the last two years it seems as though he is more productive than ever, we caught up with him to find out what drives his enviable work ethic and unquestionable skill.

Mudo: So first off let people know who you are, where are you from and who do you ride for?

M: You made the switch from long-term board sponsor The Harmony to Landscape last year, what were the factors that led you to moving on to new pastures?

J: Yeah, I just thought it was time for a change, something new.  I loved skating for the harmony but at the time there wasn’t really much going on there and I think I just needed a change. I was really stoked on lannerz though!

M: How is it having Snowy as a boss now that he has mostly taken the reigns from Fos over at Landscape? I heard that you were the first person he wanted on the team when he took over.

J: Snowy is rad!  Always on a hype and down for the spot search. I think he’s doing a good job so far to be fair; He’s made a few power moves here and there when he’s not at some festival or some shit…

M: You have been around for a while now (I think the first thing I remember seeing of you was that Etnies poster that came with Sidewalk magazine a good number of years back, I had that one up on the wall at my dad’s) but over the past few years you have been putting out more footage that ever, what keeps you sparked on filming shooting?

J: I’m just down for it I guess, still finding spots and learning tricks and having a lot of fun in the process, what more could you want?I think I’m just addicted to skateboarding, I fucking love it.

M: You can often be spotted on the other side of the camera is that something that you think keeps you in the filming mindset?

J: I guess yeah, there is always a camera around so if I’m not being filmed I might as well be filming other people so I guess that kind of just helps you to keep on producing footage.

M: Can you tell us about “Snake Eyes Die”, your video that came out earlier this year, how long was the whole process for that and how has it differed from projects you have been a part of in the past just as a skater, is it more pressure, do you enjoy it more?

J: It was just meant to be a short fifteen min video at first, with the idea of making the soundtrack first then just filling it up with footage afterwards. But when I went to my mate’s to record the mix we just kept picking more songs and adding bits until it ended up pretty long, like a full length video. So for the next two years I just started filling it up with clips part by part, section by section. So it was a bit different from the projects I have done before but pretty fun.

(Joe’s part in “Snake Eyes Die” the video that he filmed and produced.)

I don’t really feel pressure on summit like that because it’s just you and your mate’s having a laugh, and it’s just making a video that I want to see. No one’s put any money into it or anything; I reckon that’s when you feel the pressure.

M: The Manchester scene seems healthier than ever in recent years, and you (along with NOTE) have been a big part of that. What do you think are some of the main things important in the maintaining of a healthy scene?

J: Just having a good skate shop and a good spot or skatepark where everyone can hang out and meet up, that’s the most important thing. If you don’t have those things then people don’t really meet up as much or get the opportunity to be involved with other parts of the scene like video premiere’s and shop teams and shit.

M: Kind of on that topic a friend of mine from here in Ottawa named Austin had met you over in Manchester a few years back, and he mentioned that you had filmed a couple of lines of him in the skate park, and that you were going to send to the council to show them how run down it was getting. I would say that kind of hands on pro active attitude is also essential.

J: Yeah I remember Austin! He killed it, kickflip 5.0 if I remember correctly…Yeah at the time the park was falling apart, but we managed to get it re surfaced. I never ended up having to send the tape in haha. 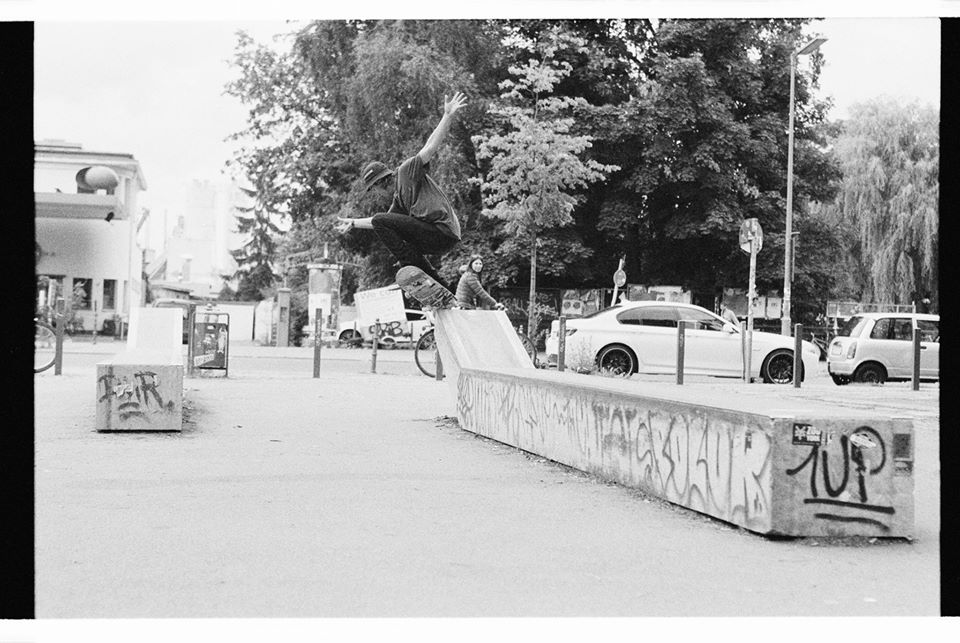 M: You also seem to be pretty involved in the local Graffiti and hip hop scenes in Manchester, or at least into it, how do these tie into the larger fabric of the Manchester scene?

J: The same they do in any city really .I love Hip-Hop and Graff and have painted for years .Some of my mates that I started skating with quit skating and started painting, and some became MC’s or Dj’s so I guess I have always known a lot of people involved in that scene in Manchester.  But nowadays it’s not really that connected. Back in the day our skate spot was like a hall of fame of Graff writers so they were a lot more intertwined. But to be honest I’m not that involved anymore really I just want to skate and do the odd piece here and there.

M: You fall into the category of skaters who’s switch style is very distinctive from their regular style, where it actually seems like a different technique and aesthetic rather than just the harder version of regular (Brian Wenning being a prime example if that helps you understand my meaning), obviously it’s a conscious decision to skate switch, so do you prefer skating switch in general, who are some of your switch stance inspirations?

J: I guess I was always told that if you learn a trick, learn it switch straight after because it’s better/harder to do it switch, which is sometime’s not the case. I don’t know, I had a knee operation when I was younger which left my right leg way less powerful for about a year, so I just trained up the switch tricks. I’m not sure if I prefer it but I like it because it feels rad because your kinda riding backwards like if you do a regs heelflip your body is kinda facing forwards but with a switch one you’re almost looking backwards and that shit feels good at speed. Inspirations; Ronnie Bertino!!…Jake Johnson’s dope…Brian Wenning…Keenan had the best ever switch mongo, along with J.B Gillet. Paulo Diaz made me want to nollie …ahh man the list goes on and on!

M: You have also always been known for stringing long lines together using any and all of the terrain around you, wallies and pole jams were very apparent in your parts long before the recent surge in popularity of those tricks, where did the inspiration for that side of your skating come from? Was it an individual, your surroundings, a photo or video part?

J: I guess I always really loved east coast skating from watching videos with people like Ricky Oyola and Donny barley, just attacking shit in the street. Pole jams have always been one of my favorite things to skate, the feeling of just charging it is so different from say a manual trick. But don’t get wrong don’t get me wrong, I love a good manny .Plus I like the fact that they are only there for like a day or two so you just have to take it as it is, there and then, before they get fixed.

I found two today and jammed the hell out of em’ haha.

M: What have you got in the pipeline that you are working on right now? Any landscape full length on the Horizon?

J: I’m putting the feelers out there on that one so hopefully yeah…. Other than that just finding pole jams filming for James Cruikshank’s new video and another local video done by Jim Craven.  Its getting cold though man!

M: Well that’s not going to gain much sympathy from people reading this in Canada but I hear you. Ok well thanks again for doing this Joe, it’s always a pleasure and we are looking forward to whatever we see from you next.

One thought on “the Joe Gavin interview”