As tonight is all Hallows eve, we thought it might be appropriate to scour the memory banks for some Halloween related skateboarding. And where better to start than with some classic footage of Tony Trujillo and John Cardiel from the Rampworkx in Liverpool’s “Night of the Living Dead” Jam from October 31st 2007, complete with the tombstone that read “R.I.P. Robbie Reid” as Transworlds former U.K. news writer had recently upped sticks to the states, the tombstone was last seen gracing the walls of Nocturnal skate shop in Philly but from the website it looks like they might have cleaned the place up a bit since I was last there.

Following that we have one of the best of the annual Toy Machine Halloween demos at Active Rideshop, and think of it what you will but Johnny Layton’s Big Boy costume and Mario and Luigi going back to back is going to raise a smile if nothing else.

And finally the instant HD classic that was last years Leeside Halloween Jam. Friends, fiends, fireworks and fun! The top comment on Youtube for this video is “First time I can say…fuck I wish I lived in Canada”, and I can honestly say that if I had not already fled my homeland in favour of the great white north, I would be bound to agree. 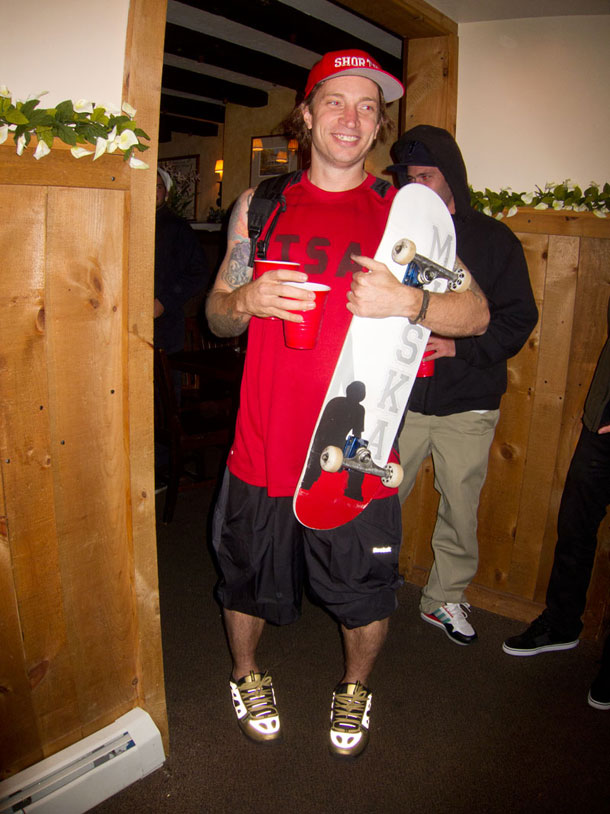 Jamie Thomas goes back in time and revisits the heyday of former team mate Chad “The Muska” Muska. (Hammeke photo.)

I could not resist a little post posting edit to include Julien Stranger’s Andy Roy get up from this year. I get that this costume might be the most cost effective of the bunch but that’s gonna take a bit of scrubbing to get off the morning after. Also what do you think tastes worse colouring in your teeth with sharpie or Andy Roy’s actual mouth?