Monday morning, a traditional low point in the week. A time when the days of work laid out ahead of you seem to stretch out into infinity an uphill marathon until Wednesday when it turns into an exhaustive exercise in perseverance with the Friday finish line sliding slowly into view. The previous weekends endeavors are already lost to the ether and memories of the good times are mere shadows of an ancient history.

Well allow us here at Mudo to make your Monday a little more bearable with our new regular feature; the Monday Media Review. Where we will provide and review a video that you might not have had occasion to see from the previous week. So whether you are skiving off in the toilets with the I-phone (or other brand name futuristic handheld device), or taking the day off sick in bed with the flu (hangover), sit back, relax and take in the sights and sounds of urethane on concrete.

This week we present Yardsale’s “LDN-LAX” produced by Daniel Kreitem who has a little interview up on the Slam site right now.

The first thing that I noticed about this video is the strange “sunshine and blue skies” filter that seems to have been applied to all of the footage, unless they filmed all of the UK footage during the two days of the year that the little orange ball in the sky decides to peek out from behind the clouds. Combined with the jazzy electro and hip hop soundtrack it gives London the look and feel of Miami while footage from across the pond ends up with a washed out desolate look that conversely leaves some of the spots looking rougher and less appealing than some of the U.K. fare.

Yardsale are a new company based out of London and I must confess I am not yet entirely sure what it is that they do, but I guess in this day an age releasing merchandise to support only the vaguest idea seems to constitute a brand so at least in releasing this video they have set one thing down very firmly, they do skateboarding. 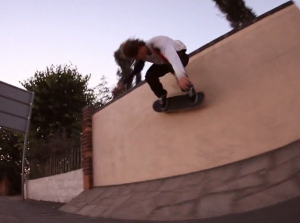 Curtis Pearl, Darius Trabalza, Jhian Namei, Adriand Adrid, and David Bowens all have parts in this project and while the many wall rides no complies and mediocre mini ramp tricks performed on small bank spots comes dangerously close at times to becoming a blur, there is enough creativity and individuality in style to give each part its own merits. That having been said I will not go into discussing them at length as you have no doubt watched the video before reading this far, and I would assume are at least semi sentient beings capable of forming your own opinions and feelings.

I will say that I far preferred Adrian Adrids footage in this than in Heroin Skateboard’s latest production “Video Nasty”. The slicker editing style here highlights a light footed quality that Video Nasty’s quick cuts often made look more like luck, although having since gone back and re-watched that part I think that it might have been more of an oversight on my part than anything else. Regardless this guy has put out two entertaining parts this year and is likely one to watch out for.

The main talking point of this video however has to be that it serves as a reminder to us all that Forrest Edwards was not the most cheated of the SLAP “one in a million” alumni of recent years. While the pantomime of Forrest vs. a bunch of middle class white dudes and his inevitable second place finish due to having a “bad attitude” (yup, that’s right kids it counts!), Tom Krangelov and David Bowens fighting it out for the top spot the previous year was a truly adversarial match up. Both dedicated and  single minded in there approach to the competition they went back to back on spot after spot until eventually Krangelov was judged the winner. Maybe the release of “Cold War” (the upcoming Zero video) will change my mind, but after seeing Bowens part in this all I could think was that he was always the better of the two, and what a shame it was that we have seen so little from him since. My understanding was that he was on Alien Workshop flow for a little while, and in fact we got this clip from him that now seems like a kind of pre cursor to the always entertaining “Life Splicing” series. With everything that has been going on a Alien in the past few years its not entirely surprising that he slipped through the cracks.

Hopefully as Yardsale get a little more momentum behind them we will se a lot more of David and the rest of them. Whether or not we find out exactly what it is that Yardsale do if they keep supporting the right people and putting out clips like this ill be looking to support whatever they decide to put out.